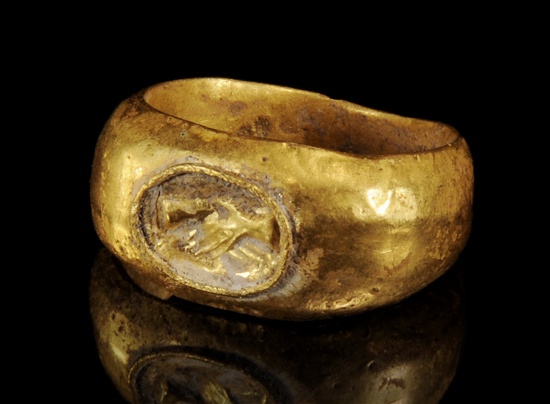 The giving of a ring as a part of the marriage or betrothal ceremonies appears to date from the Roman times. At the betrothal the maiden’s father made a promise of marriage, on her behalf, to the man. He in turn, gave her a ring as his pledge. This ring was at first made of iron, with no stones since the wearing of gold rings was not permitted, except by special privilege at that time. By the 3rd century A.D. the Romans had abandoned such austere ideals and gold was now the preferred metal. The designs were simple in nature; clasped hands, a lovers knot, or a simple band with an inscription, were the most popular. These forms had great staying power…over a thousand years!

For the Romans the betrothal was a solemn ceremony, but not considered unbreakable. The early Christians placed an increasing importance on the betrothal however, and finally incorporated the plighting of troth into the marriage ceremony. Now the betrothal ring had become the wedding ring and was regarded as the symbol of an unbreakable contract. In time the need would be felt for another ring to be given at an earlier stage of the relationship as a sign of an intention to marry, thus eventually producing the modern engagement ring.

The custom of wearing the ring on the third finger of the left hand also comes from Roman times. The Romans believed there was a vein in it, (the vena amoris ) which connected directly with the heart.

In part 2 we’ll take the wedding ring into the middle ages and the Renaissance. I also want to acknowledge Anita Mason and Diane Parker’s fine book “An Illustrated Dictionary of Jewelry,” for much help in researching this three part series on the wedding ring.