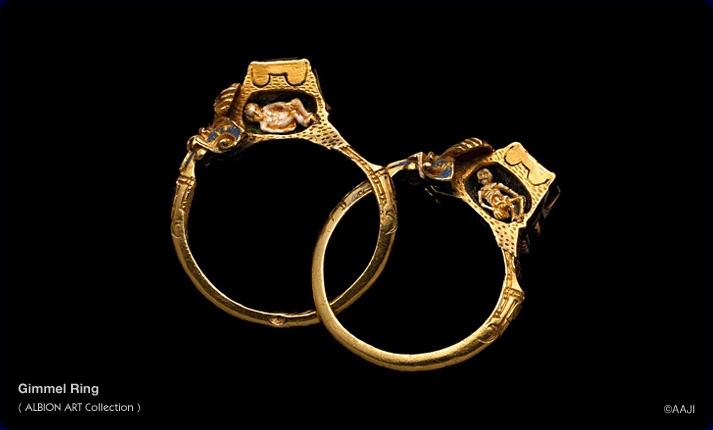 I had mentioned in Part 1 of this series that it was the early Christians who first incorporated the Roman betrothal ring into the Wedding Ceremony thus making it the first true Wedding ring. We enter a period of time now of almost 1000 years in which it is almost impossible to say, for certain, just what a particular ring was intended for: a betrothal, wedding, or simply a lovers token or one of friendship. There are a couple of good reasons for this, the first being the great variety of forms and conventions for betrothal and marriage being used during the period we’re involved with, and secondly the wearing of many rings was very fashionable, and giving rings as a token of regard almost a social convention, especially during the middle ages. The fact that many of these were inscribed with amorous verse and symbols of love was perfectly acceptable.

There were numerous styles of rings used for betrothal and Wedding Rings from the middle ages throughout the Renaissance. There are a couple of the most popular I’d like to single out. One very simple style, the fede ring (an Italian word for good faith ) is perhaps the oldest and most long used. Basically, the fede ring was a band with clasped hands (dating back to Roman times). It was modified by adding stones or an inscription or by setting a stone at the front and moving the clasped hands to the sides of the band but it continued in use into the 19th Century.

In the last segment on Wedding rings we’ll explore ‘Posy’ rings and finish with the modern engagement set.