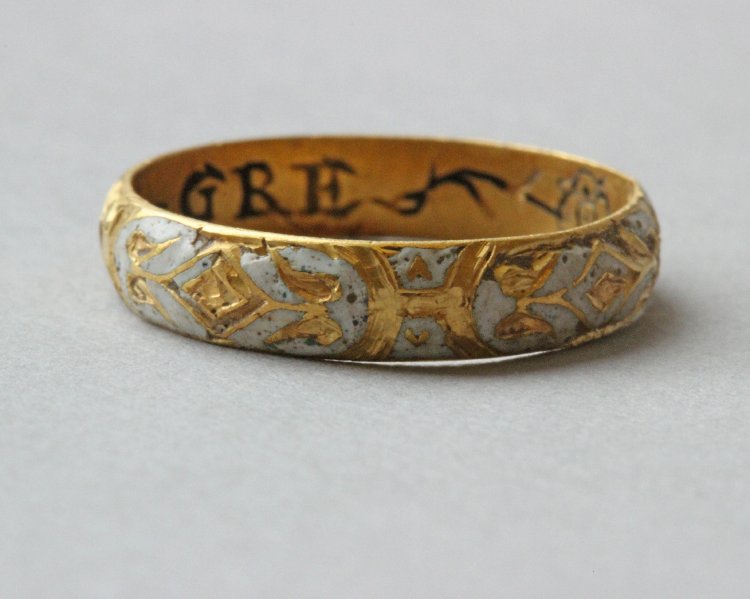 In the second part of this series we got as far as the 15th. century and that brings us to a fanciful style known as the Posy Ring, so called because it was inscribed on the inside with a verse or “poesy”. The early inscriptions often came from chivalrous mottos carried by the knights at tournaments such as “Joie Sans Fin” and a simple “forever”. In the 16th. century the composition of elegant “posies” was a courtly pastime and numerous examples have come down to us in the literature of the time.

Such as: “True love has led my heart to choose, My heart is dead if you refuse”.

The form of these rings was quite plain on the outside, just a simple band of gold or silver with its inside inscription essentially a private one.

The “poesy” rings of the early 17th. century showed a preoccupation with clever double meanings and word play, but by the mid-century it was obvious that chivalry had declined sadly in verse such as these: “Love him who gave thee this ring of gold, Tis he must kiss thee when th’art old” and “If thee dosn’t work thee shan’t eat”.

I don’t suppose it’s too surprising that the popularity of the Posy style ring faded away by the 18th. century.

The idea of having separate rings for engagement and wedding didn’t become established as customary until the 19th. century. This is pretty much standard in most of Europe and America now, often, though not always, with a corresponding mans ring for the wedding.

The variety in style, gems and price has probably never been greater than it is for todays couples. From the simple plain band in gold, silver or platinum, to matching rings encrusted with diamonds and other precious stones the opportunity is there for each person to make their own personal statement with custom made jewelry that can be uniquely their own.

I hope you have enjoyed our series on wedding rings and that you will stop by and check out some of the really special things that we can do if you are looking for Wedding Rings.